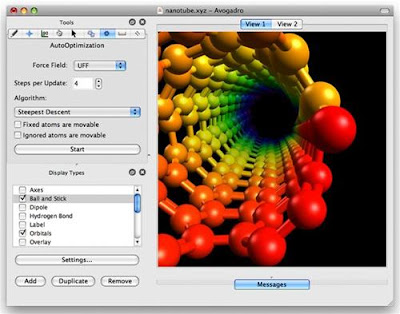 Avogadro is an advanced molecular editor designed for cross-platform use in computational chemistry, to molecular modeling, bioinformatics, materials science and related fields.
It offers a flexible framework and a powerful rendering plug-in architecture. After installing the program stpnovitsya portable. Runs through avogadro.exe, located in the folder [bin]

Features:
* Built-in molecular mechanics (including MMFF94 and UFF).
* Enter the generation of Gaussian, GAMESS-US, Molpro, NWChem, Q-Chem, MOPAC, with the addition of packages in the future.
* Support crystallographic cells.
* Developer of oligopeptides.
* Visualizing isosurfaces and orbits, including the Gaussian cubes, OpenDX, and Gaussian files fchk.
* Animation calculated molecular vibrations and the trajectories of the reaction.
* Full range of views with zoom and continues to expand.
* Export models in POV-Ray.

In addition, Avogadro provides libraries (libavogadro), which can be used for software development.

The program does not provide the choice of language. Version 1.0.1 has only in English. It is proposed to fully russifitsirovanaya version 1.0.0 of 2009-10-23.