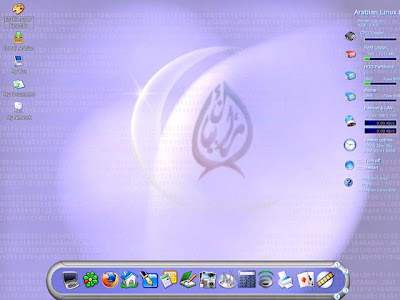 Arabian Linux 0.6 beta 4 was released on or about September 4, and at the request of a reader, Tuxmachines downloaded, burnt and test drove this lovely installable livecd tonight. As the name implies Arabian is primarily designed for Arabian speaking users, however it does have support for English as well. Since this latest release is two month old, some of the packages are going to seem a big dated, but it none the less is worth a look. Great looks, stability, and imaginative customizations make Arabian a worthy contender in either language. In fact, Tuxmachines was quite impressed.

Some of its notable features include:
* Arabian Language support in Gui and consoles/logs/configuration tools etc
* winmodem support
* hard drive installable
* Based on Debian and Kurumin (which is based on Knoppix)
* accurate hardware detection

Upon boot one is given the choices of (1) Arabic Language, (2) English Language, (3) Extra Hardware Detection. It's a pretty yet professional quality boot screen featuring easy editing of the grub system booting options. The splash option didn't seem to do anything as the splash=silent booted using the same =verbose screen. But as the initial boot screen, the background splash is subtle and unobtrusive.
Download Versi 0.7